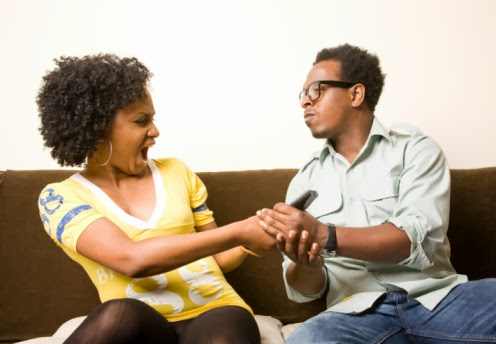 I remember those days when my eyes and fingers stayed glued to my phone just exchanging texts with my beloved. The phone was my most valuable possession; I held on to it like a lifeline. So whenever the network acted up, I felt like I was drowning. Little did I know that my love-link would end up being my rival in the long run.

Because of his busy work schedule, most of our conversations were virtual and it was an acceptable alternative; it was not ideal but I had to tolerate it whilst waiting patiently for the day we will start our lives together as Mr. and Mrs.

The beginning was bliss; the honeymoon was just perfect. Our phones were on break and we finally had all the time in the world to connect face-to-face. I remember those moments like they happened yesterday; holding on to his every spoken word like a respirator and never getting tired of watching his face, mesmerized by every expression, twitch, arch smile or chuckle.

But it seems when our honeymoon ended, my hubby’s phone resumed its duties as his number one companion. For the next three months or so, the phone was still a useful device in keeping the passion sizzling with check-in messages from time to time or the magic three words which never get old popping up on my phone screen at just the right time, making me smile and feel all mushy like our dating days.

But when the texting began to wane, so did our usual night talks. The catching up on the day’s events whiles preparing dinner was replaced by he sitting in front of the TV and his fingers continuously tapping on his phone.

What particularly gets to my nerves is when he simply replies, “Oh, it was okay; nothing much,” when I ask how his day without even lifting his head to look at me as he says it meanwhile chatting and laughing out loud.

When I tell him how much it bothers me, he makes me feel like the inconsiderate one. It’s his job; he almost always needs to be online to keep himself up-to-date with the world’s happenings. Yeah right, the world news is more important than his wife’s feelings.

And though whatever belongs to one is for the other as well, apparently, that doesn’t apply to his phone. It was my no-go area. Why, I have no idea. If I speak up, then he makes me out to be the nagging wife. Giving him the silent treatment even goes unnoticed much to my despair.

Before I said ‘I do,’ all I could think about was spending quality time with him under one roof. But now that we are under one roof, I have to come up with creative ideas each time to get him to pay attention to me. Whew, this is a whole new marital degree I was not prepped for.

Whenever his phone rang or beeped, I would glare at it as if it was an enemy I couldn’t stand but couldn’t get rid of anyway. I even caught myself daydreaming throwing it at the wall or accidentally dropping it in his tea or something. As if that would be the end of my troubles. He would just get himself another one by the day’s end. How do you pick a fight with a technological rival?

I love my husband but I hate his phone. He assures me it’s all work and I will forever and always be his priority but I should understand that his work might get in the way sometimes.

I wish I could have more of him; but in this technology-obsessed era, I know that will be a challenge. If only I could turn back the hands of time to the time when the phone was not this embedded into our lives. Do I just live with it or is there a way out?

Enjoyed the read? Show your love by sharing with your friends!

Thanks for reading. Have some thoughts? Drop them below and let's chat! Cancel reply

This site uses Akismet to reduce spam. Learn how your comment data is processed.