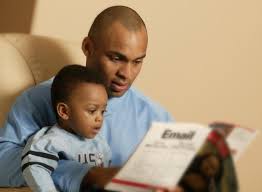 The daughter is the feminine side of the father;
The son, the father in a younger version;
The father loves them both;
But expresses it differently.

He may not cuddle his child like the mother does;
But that doesn’t mean he has no affection for him;
He watches over the kid with hawk-like eyes;
Ever ready to come to his rescue come what may.

Tenderness is a trait every father has;
Although we may not see it in his actions;
But if only you would take time and look into his eyes

You would realize he loves you more than you think.

Our mothers are irreplaceable and so are our fathers;
Their firmness and strength of character is to keep us safe;
Mothers bear our pain with us;
But the father’s touch takes the pain away.

So whenever he scolds or shouts in anger;
And you run away crying;
He cries with you in his heart;
And feels your hurt in his silence.

A father’s love, who can understand?
Strong and firm, harsh but kind;
Not always expressive but always present;
His love is felt most in his silence.

Enjoyed the read? Show your love by sharing with your friends!

Thanks for reading. Have some thoughts? Drop them below and let's chat! Cancel reply

This site uses Akismet to reduce spam. Learn how your comment data is processed.